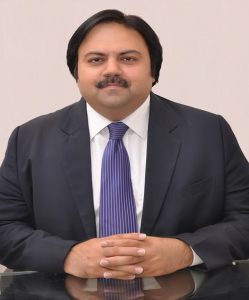 He is presently the Chairman of SAFA Committee on Governmental and Public Sector Enterprises Accounting. He is also the President of SAFA Assembly. He has served ICMA Pakistan in various capacities and has ample exposure of the functioning of CAPA and IFAC apart from SAFA. During the period 2012-14; he assumed the responsibility of President of ICMA Pakistan with distinction of being its youngest President since inception of Institute in 1951 by attaining this position at the age of only 37 years. He is Member of Policy Board of Auditor General of Pakistan (AGP) since February 2018. Government of Pakistan has appointed him as Member Board of Directors of the Ignite National Technology Fund. Ignite National Technology Fund is a public sector company under Ministry of Information Technology and Telecommunication, Government of Pakistan.

Mr. Zia ul Mustafa has exposure of over twenty years in corporate and public sector organizations during which period he remained associated in various segments of economy like manufacturing, construction, services, banking and education. Presently; he is serving as Chief Financial Officer & Business Administrator of Pakistan Expo Centres Private Limited, a corporate entity owned by the Government of Pakistan with a mandate to develop, operate and promote Expo Centres in major cities of Pakistan. He is performing his duties since the inception of the Company i-e 2005 when the project of Expo Centre Lahore was just an idea. As a leading team member of Pakistan Expo Centres, he played a vital role in converting the idea of Expo Centre Lahore into reality and successful execution of this project. In recognition of his contribution, he also received award from Prime Minister of Pakistan. He has also served as elected Board Member of Pakistan Institute of Corporate Governance (PICG) for three years and as Member Board of Directors of Zarai Taraqiati Bank Limited with additional responsibility of Chairman, Board Audit Committee for a period of three years. Apart from having corporate and professional experience; he also enjoys good reputation as corporate trainer.