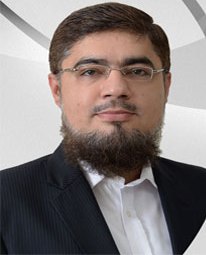 KHALILULLAH SHAIKH Mr. Khalilullah Shaikh is a Fellow member of the Institute of Chartered Accountants of Pakistan (ICAP) and serving as elected Council member of ICAP since 2013. He has served as Vice President of the Institute and chaired various committees and task forces of ICAP, including Investigation Committee and Professional Accountants in Business Committee. Mr. Khalilullah Shaikh has also served as elected member of Southern Regional Committee of ICAP. He is also a member of PAIB Committee of International Federation of Accountants (IFAC) since 2016.

Mr. Khalilullah Shaikh has more than 15 years of work experience in senior management roles. He is currently working as Chief Financial Officer of Pakistan International Airlines. Prior to this, he was associated with K- Electric and served in various roles, as Head of Supply Chain, Director Finance and Chief Internal Auditor. Mr. Shaikh has also served as Head of Treasury at Pakistan Refinery Limited.

Mr. Khalilullah Shaikh has a passion for human development. He has been conducting weekend lectures for CA Final students and his student alumni include over 1,500 Chartered Accountants of Pakistan. On the academic front, he secured Five Gold Medals in CA Final examinations,which is a record in the history of ICAP.